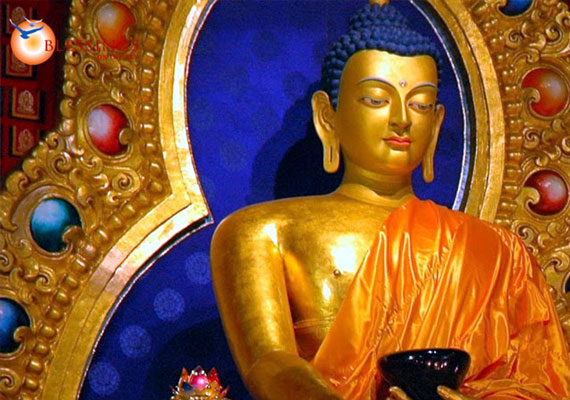 The full moon day of April/May is celebrated as Buddha Purnima or Buddha Jayanti. Buddha's birth, enlightenment, and nirvana (salvation) fall on the same day. People offer incense, flowers, candles, and fruits to the statue of the Buddha to mark the celebration. On this day the Buddhists reaffirm their faith in the five principles called "Panchsheel".

The Buddha (meaning "whose purpose has been achieved") is regarded as the ninth incarnation of Lord Vishnu. He was born on the Full Moon day in the month of Vaisakh in 563 BC. Traditionally, Buddhas Birthday is known as Vesak or Visakah Puja (Buddhas Day). Vesak, the major Buddhist festival of the year, celebrates the birth, enlightenment and death of the Buddha on the one and the same day, on the first full moon day in May, except the leap year when this festival is held in June. The celebration is called Vesak, being the name of the month in the Indian calendar.

According to the Buddhism, sorrow and desire are the main cause of all the evil and suffering of this world. Lord Buddha advocated the Eightfold Path consisting of precepts like right conduct, right motive, right speech, right effort, right resolve, right livelihood, right attention and right meditation to gain mastery over suffering. It is only after following this path one can reach the ultimate aim of Nirvana. Nirvana is the transcendental state of complete liberation. Gautama Buddha lived and taught in northern Inda in the 6th Century B.C.

Buddha travelled far and wide teaching hundreds of followers. Even after death his disciples continued to spread his teachings.

Rich and poor alike were attracted by the simplicity of Buddha's teaching and his emphasis on complete equality of all, a notion antithetical to the existing Hindu caste system. The Mauryan Emperor Ashoka espoused the Buddhist religion in the 3rd century B.C. and helped in spreading it far and wide. Sarnath and Bodhgaya are two of the most important pilgrimage centres for the Buddhists.