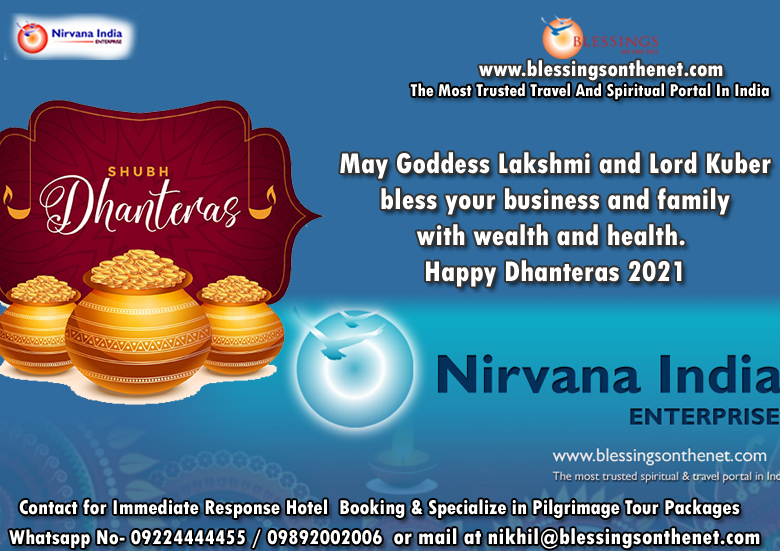 Another interesting story famous about dhanteras is related to the son of King Hima and his intelligent wife. It was predicted about him that he would die on the fourth day of his marriage. And the reason behind his death would be snakebite. When his wife came to know about such a prediction she decided not to let her husband die and for this she made a plan. On the fourth day of their marriage she collected all the jewellery and wealth at the entrance of her husband's boudoir and lighted lamps all around the place. And she started telling stories and singing songs one after another in order to not let her husband sleep. In the mid night Lord Yama, the God of death arrived there in guise of a snake. The bright lights of the lamps lit by the wife of the king's son blinded His eyes and he could not enter their chamber. Therefore Lord Yama found a place to make himself comfortable on top of the heap of the jewellery and wealth and kept sitting there for the whole night waiting to get a chance to bite the king's son. But as the wife of the king's son kept telling stories and singing songs for the whole night therefore he could not get any chance and in the morning he left the place quietly. Thus the wife saved her husband's life from the cruel clutches of death.

Since then the day of dhanteras is also known as the day of 'Yamadeepdaan' and it has become a tradition to light a diya on dhanteras and to keep it burning throughout the night in reverential adoration of Lord Yama, the God of death.

Dhanteras Celebrations
The people worship Lord Yamaraj, the God of death, on this day and light a 'Yama-Diya' in the night to offer prayers to Him to bless them with prosperity, well being and protection.

The people purchase a new utensil, silver or gold coin or some other precious metal as a sign of good luck on the day of dhanteras. This is also a tradition related with celebrations of the festival of Dhanvantari Trayodashi.

The day of dhanteras has great importance for the mercantile community of Western India.

There is a peculiar custom in Maharashtra to lightly pound dry coriander seeds with jaggery and offer as Naivedya.

In the rural areas the cultivators worship their cattle because they form the main source of their income and livelihood.