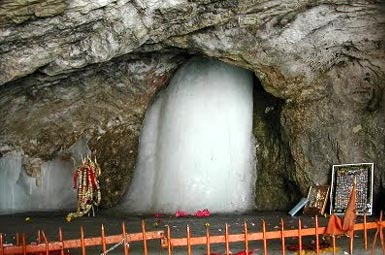 The holy shrine of Amarnath Ji, or Amarnath Temple, is located in Jammu and Kashmir , about 29 kilometers from Pahalgam. Amarnath Temple is considered to be one of the 18 Maha Shakti Peethas, or the holiest shrines in Hinduism. Inside the cave is a Shiva Lingam (a phallus shaped formation made of ice),Amarnath cave is accessible only during a short period of a year, usually in the months of July and August ,with the pilgrimage tour famously known as Amarnath Yatra, which begins from Chandanwari.  . At that time, inside the cave, a pure white ice-lingam comes into being. Water trickles, somewhat mysteriously, in slow rhythm, from the top of the cave and freezes into ice.It first forms a solid base and then on it a lingam begins to rise, almost imperceptibly, and acquires full form on Purnima. It is believed that on that day, Lord Shiva revealed the secrets of life to his consort Parvati, the beautiful daughter of the Himalayas Amarnath is regarded as one of principal Hindu Dhams.The holy cave is the residence of the holy trinity, Shiva lord. The guard of the absolute, lord Shiva, the destroyer, is present in the form of ice Lingam in this cave located at a more remote end of the valley of Lidder. This lingam is made naturally of a stalagmite of ice which awakes and weakens with the moon.

More info on the city