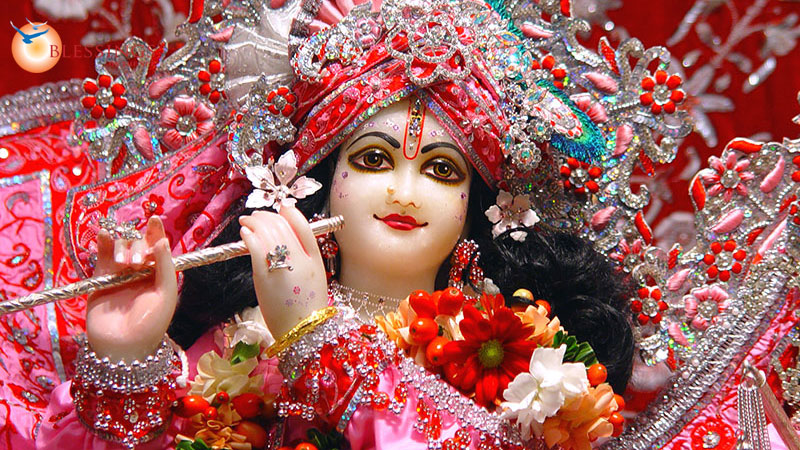 Lord Krishna
Lord Krishna was born to Devaki and Vasudeva in the jail cell of Kamsa at Mathura (UP) over five thousand years ago. The place of His birth is known as "Sri Krishna Janmasthan" or Janmbhumi.

There was a period when the earth was ruled by the wicked activities of kingly demons. The demigods including the Earth goddess requested Lord Visnus protection. Seeing the deteriorating conditions the Supreme Lord Sri Krishna decided to descend for the benefit of all.

Lord Krishna appeared on the midnight of the 8th day of the dark half of the month of Shravana. This corresponds to July 19th 3228 BC. He exhibited His "leelas" (pastimes) for about125 years. On February 18th 3102 BC on the new moon night of Phalguna he disappeared. His departure marks the beginning of the current age of corruption known as Kal Yug.

During the great war "Mahabharata" at Kuruksetra, Lord Krishna played the role of a charioteer on the side of the pious Pandavas. At the start of the war, Lord Krishna delivered His famous message known as The Bhagavad-Gita, literally the Song of God. This war concluded with the destruction of the demonic kings and the reinstatement of the righteous Pandava princes.