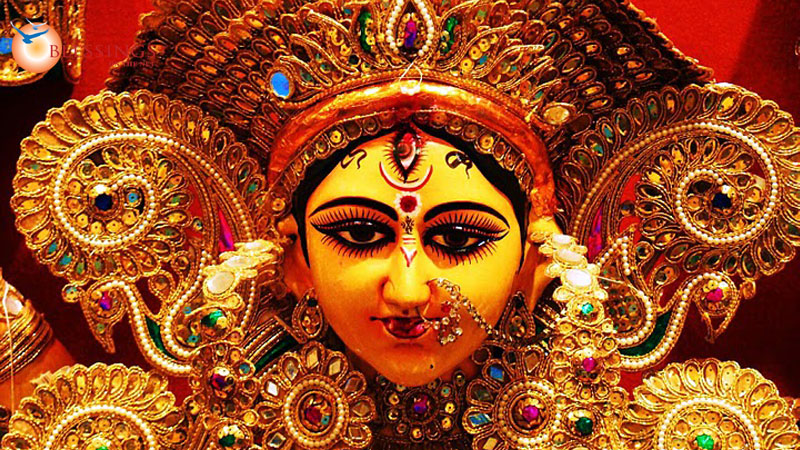 Durga, in Sanskrit means "She who is incomprehensible or difficult to reach." Goddess Durga is a form of Sakti worshiped for her gracious as well as terrifying aspect. Mother of the Universe, she represents the infinite power of the universe and is a symbol of a female dynamism. The manifestation of Goddess Durga is said to emerge from Her formless essence and the two are inseparable.

Goddess Durga represents the power of the Supreme Being that preserves moral order and righteousness in the creation. Durga, also called Divine Mother, protects mankind from evil and misery by destroying evil forces such as selfishness, jealousy, prejudice, hatred, anger, and ego.

The worship of Goddess Durga is very popular among Hindus. She is also called by many other names, such as Parvati, Ambika, and Kali In the form of Parvati, She is known as the divine spouse of Lord Shiva and is the mother of Her two sons, Ganesha and Karttikeya, and daughter Jyoti. There are many temples dedicated to Durga's worship in India.

In Her images, Goddess Durga is shown in a female form, wearing red clothes. She has eighteen arms, carrying many objects in Her hands. The red color symbolizes action and the red clothes signify that She is always busy destroying evil and protecting mankind from pain and suffering caused by evil forces. Following is the symbolism associated with Goddess Durga:

A tiger symbolizes unlimited power. Durga riding a tiger indicates that She possesses unlimited power and uses it to protect virtue and destroy evil. The eighteen arms of Durga signify that She possesses combined power of the nine incarnations of Lord Vishnu that have appeared on the earth at different times in the past. The tenth incarnation, the Kalkin (a man on a white horse), is still to come. Thus, Goddess Durga represents a united front of all Divine forces against the negative forces of evil and wickedness.

The sound that emanates from a conch is the sound of the sacred syllable AUM, which is said to be the sound of creation. A conch in one of the Goddess's hands signifies the ultimate victory of virtue over evil and righteousness over unrighteousness.

Other weapons in the hands of Durga such as a mace, sword, disc, arrow, and trident convey the idea that one weapon cannot destroy all different kinds of enemies. Different weapons must be used to fight enemies depending upon the circumstances. For example, selfishness must be destroyed by detachment, jealousy by desirelessness, prejudice by self-knowledge, and ego by discrimination.