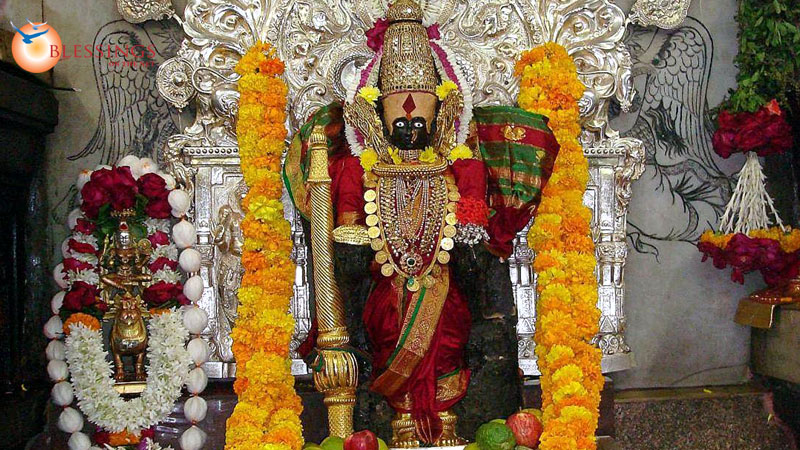 Hindu Goddess, known in India as Devi (literally "goddess"), has many guises. The oldest and most frequently manifested deity of the Hindu pantheon is Devi, the Goddess. Like the ancient pre-Aryan mother goddess. Devi appears as both the broad-hipped provider and as the fierce destroyer of mortal life. She is worshipped in India's villages in myriad forms, such as Bhu, the ancient earth goddess, Parvati, daughter of the Himalayas, the avengers Kali and Durga, and as the consort of numerous male gods. She is often called Mother - Mata or Mataji in northern India, and Amman in the jungles of the south - and is usually represented as the yoni, the female principle surrounding the male linga.

Like the old mother goddess, Devi is primarily associated with fertility and the earth. India itself is seen as the body of Devi, whose forms can be found in the features of the landscape.Devi is the "Mother Goddess," meaning she is the mother of all. In her hands she holds joy and pain, right hand; and life and death is held on her left hand. Devi is the god of nature and life because she brings rain and protects against disease. Devi is mild and loving. This was the personality of Devi as mother of life. Cities such as Calcutta (Kali Ghat) draw their names from forms of Devi, and goddesses are often named after natural features, such as Rama's consort, Sita, whose name means furrow. Where the male deities of the Hindu pantheon are otherworldly, the avatars of the goddess are active and immanent. Devi is not distant from the maya (illusion) of worldly life, but is known as Mahamaya (Great illusion). Since the land itself is her body, she may be both known and approached by her devotees.As mother of death, she is terrible. In her description, Devi has eight arms, only one arm has a sword. When she is fighting against evil, she is usually mounted on a lion or a tiger. Devi holds the universe in her wombs. Devi is the warrior Durgha when she is the mother of death. Gods begged Durgha to kill and protect from the evil Mahisasura. Devi is in all the women's soul and she can also turn into the religious Uma.
Devi's diagram is called her mansions. In the middle of her forehead, she has a Bindu (drop or dot) which in some ways seems to be masculine. Lakshmi, wife of Vishnu is an incarnation of Devi. She is the goddess of creative power and represents all women in the universe.

The male deities Shiva, Brahma and Vishnu (the trimurti) embody ideals toward which their devotees can only strive. Brahma is little more than a transcendent principle; Vishnu represents a moral ideal of inhuman purity; Shiva's ascetic severity is unattainable by mortals. The Goddess, on the other hand, is defined by her action in this world. While Shiva meditates high in his Himalayan retreat, the Goddess in her incarnation as Kali fights on the battlefield, slaying the demons of ignorance with a vigour quite unlike Krishna's calm detachment. The Goddess's power to act in the human world was elaborated by theologians, particularly in the group of texts called the Tantras. They recognized Devi as the holder and centre of divine power (shakti). The Goddess's horrific forms, such as Kali and Durga, were worshipped through Tantric rituals as supreme powers in themselves, unfettered by transcendent male divinities