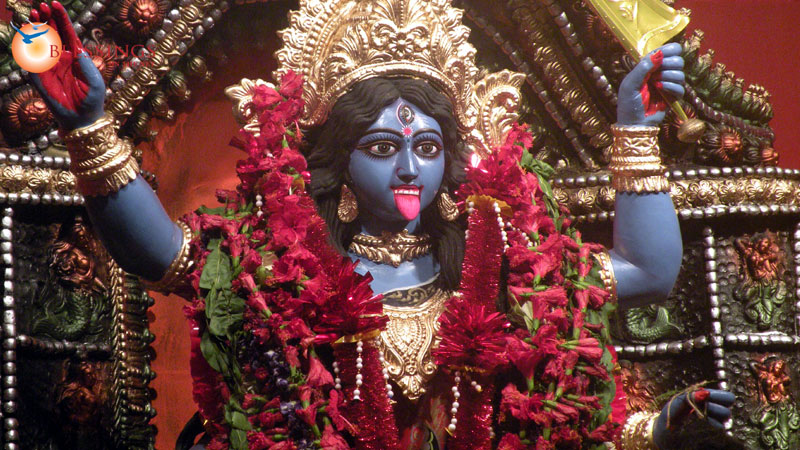 Goddess Kali is another form of Goddess Durga or Parvati.She was created by Durga Maa to help in the fight against demons. She is the ferocious aspect of Durga. According to the Puranas, this image of Durga as Kali, so widely worshipped in eastern parts of India, owes its origin to the battle of Durga with Shumbha and Nishumbha. She is also known as the slayer of the demon Raktabija by drinking the drops of his blood and not allowing them to fall on the ground.

In the images commonly worshipped, Kali is shown as an extremely black female with four arms. In one hand she has a scimitar, in another the head of a demon, which she holds by his hair, the third hand is spread flatly open bestowing blessings and in the fourth she holds another weapon, usually a spear or a trident. She has a necklace made of skulls and wears two heads of demons as earrings. Her tongue is blood red and hangs down upon her chin. Blood is also seen streaming from her tongue and upon her body. She is shown standing with one foot on the breast of Shiva and the other rests on his thigh. In some statues, she is naked except for her ornaments and wears a kind of skirt made of hands of the demons stuck around her waist in a belt.

As Kali, Durga is most fierce, inexorable killer and blind and has no consideration of any kind. In this aspect she has neither husband nor sons. As Kali she is conqueror of time. It is she who can destroy the universe. Being the destroyer of Chunda and Munda, she is known as Chamundi.