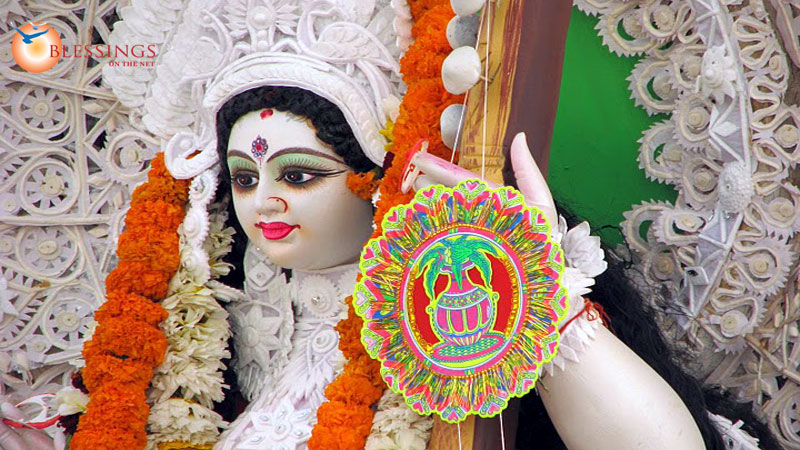 "I pray to Goddess Saraswati who fulfills the wishes of

I bow to the Goddess to enlighten me with knowledge"

Goddess Saraswati is the manifestation of intellect, art and music. She is the Shakti of Lord Brahma - the creator. After all could the process of creation be complete without the knowledge of creation? Goddess Saraswati is also revered as the Goddess of speech - Vagadevi. She is also regarded the mother of Vedas - Vedamaata. The underlying principle being that intellectual prowess was never a male prerogative in the Hindu religion.

This is an invocation to Goddess Saraswati where we pray to her to bestow upon us knowledge, memory, learning, the power of poetry, reputation and the capacity to bring knowledge to one's disciples. The perennial search for knowledge thus culminates with the worship of Goddess Saraswati.

Saraswati is the daughter of Lord Shiva and Goddess Durga. It is believed that goddess Saraswati endows human beings with the powers of speech, wisdom and learning.
Goddess Saraswati is depicted as seated on a beautiful lotus, wielding a Veena, the Vedas and a rosary. Her four arms are symbolic of the four intrinsic elements of the human personality - manas (mind), buddhi (intellect), chitta (consciousness) and ahamkar (ego).

A lot of spiritual meaning is attached to these attributes of Goddess Saraswati. Dressed in the color of purity and seated on a white Lotus - Goddess Saraswati is thus the embodiment of supreme reality and knowledge. The rosary signifies concentration and meditation. The Goddess is shown playing the Veena in Her hands, which denote mind and intellect. The underlying principle being that one should use his mind and intellect to lead a harmonious life in this material world. The swan, which is depicted as Her vehicle is symbolic of the power of discrimination between the good and the bad. At the same time she is sometimes shown riding the peacock, which symbolic of indecision and unpredictability. This signifies that one should keep one's frivolous mind in control to acquire supreme knowledge.