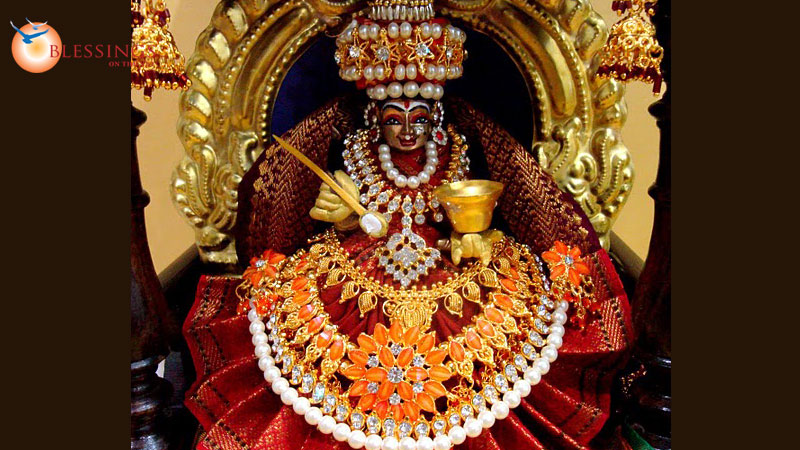 Annapoorneswari is the presiding Goddess of Kashi (Varanasi-- Uttar Pradesh). The Divine mother of the universe not only gives food and riches to her children, but also takes care of their spiritual emancipation by bestowing the nectar of Atma Gnana - the knowledge of the self.

‘Anna' means food and grains and ‘Purna' means full or complete. It is believed that by worshipping this goddess one will never be out of food anytime in life.

Mata Sri Annapurneshwari Devi is the Goddess for the fourth day of Durga Navrathri. She is a form of the Goddess Parvati, the consort of Lord Shiva and resides atop of Mount Annapurna.
GOddesses Annapoorneswari is depicted with a jeweled vessel containing food in one hand and a spoon in the other to distribute the food to her devotees. Lord Shiva is normally depicted as begging for food to her with his skull begging bowl. Goddess Annapoorna is the Supreme Goddess of the city of Kasi (now known as Varanasi), the city where moksha (freedom from the cycle of birth and rebirth) could be attained. The Sri Annapurna Ashtakam composed by Shankaracharya is devoted to this goddess of Hindu religion.

Annapoornastakam - eight verses rendered there, implores on our behalf the grant of Gnana Vairagyam -- the steadfastness born out of realization. The beautiful golden image of Annapoorneswari in the temple, which is hundred yards away from the Visweswara Temple is thrown open for darshan to the devotees during Deepavali festival on Dhanathriodasi Day when Pooja is performed for the golden idol and throughout next day on Chotti Deepavali Day it is kept open for public darshan.

According to the Sthala Puranam -- the universal mother, who started on a journey down south from Badrikasramam decided to stay at Varanasi because of the drought for twelve years.