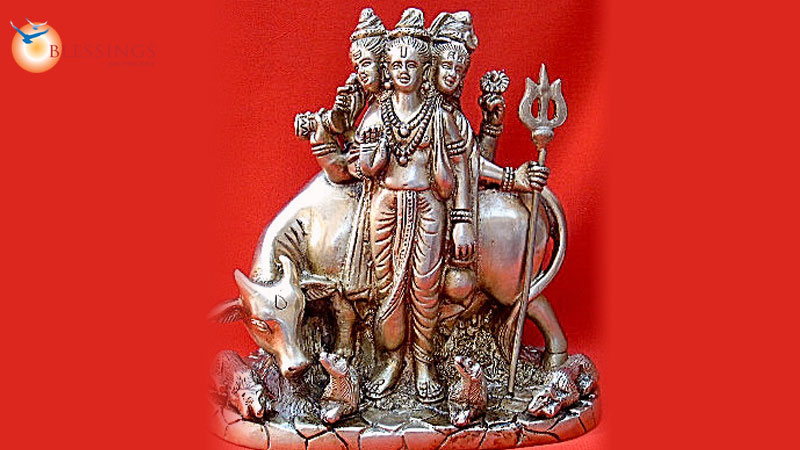 Datta is Brahma, Vishnu and Mahesh in to one all encompassing deity.According to Hindu mythology, Lord Dattatreya is believed to be the combined avatar (incarnation) of the Hindu trinity (Brahma, Vishnu and Shiva). Sage Atri prayed to the Hindu trinity, and when they were pleased with his penance, they appeared before him and offered to grant him a boon. Sage Atri asked for an offspring that would have their benevolent qualities. Thus, Lord Dattatreya was born.

The name or word 'Dattatreya' is constituted of two terms, Datta and Atreya. In Sanskrit, Datta means one who is bestowed as a gift, and Atreya is an honorific which is derived from the name of a great sage called Atri. The son of Atri is Atreya. A descendent of Atri also is Atreya. One who is bestowed as a divine child on the great Sage Atri, by the Gods Brahma, Vishnu and Siva themselves, is Dattatreya. Tradition holds that he was the divine child of Sage Atri, born to his famous consort, Anasuya. He is also, therefore, known as Anasuyanandana, the darling of the great queen of chastity, Anasuya Devi.

Lord Dattatreya is depicted as having three heads, symbolizing the past, present, and future. His three heads also symbolize the three states of consciousness. He is pictured with four dogs around him, which represent the four Vedas and his mastery over them. Lord Dattatreya is considered the teacher of all gods. He dispels all evil influences.