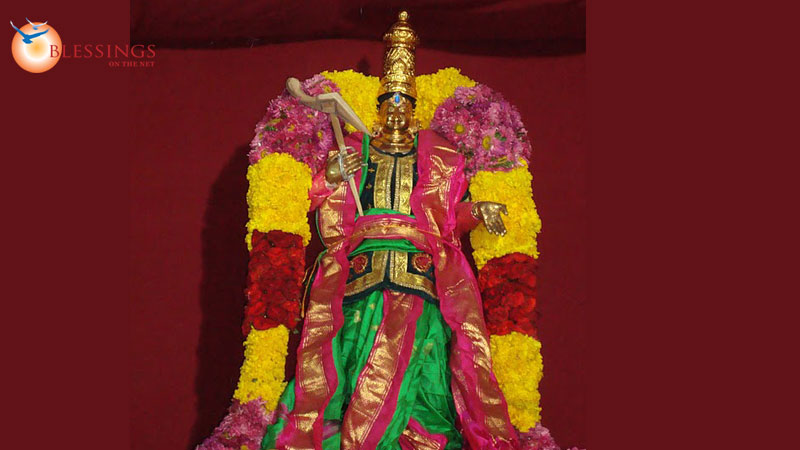 Balram was the son of Vasudev and Devaki. He was the elder brother of Lord Krishna. He is said to be the incarnation of "Sheshnag" (Serpent God on whom Lord Vishnu rests). His weapon was a plough. He is also called 'Haldhar'. He is a protector from desires, the divinity of strength or the strength of the divine, symbolizing duty, honesty and simplicity.

In the Treta age (there are four ages according to Hinduism- Krita (Sat) Yuga, Treta Yuga, Dwapar Yuga and KaliYuga) Balram's eternal incarnation was as Lakshman.

When Devaki was pregnant with the seventh child, Lord Vishnu called upon Yogmaya (divine illusion) and said, "Devaki's seventh eternal embryo should be installed in Rohini's (another wife of Vasudev) body." Yogmaya transferred the embryo to Rohini's womb from Devaki's womb. This was done to prevent Kans from killing him at his birth. Kans was destined to be killed by Devaki's eighth son, and not to take any chances he was killing all the sons born to Devaki at birth.

Rohini got pregnant and after nine months, eternal incarnation in the form of Balram was born. Kans was informed that Devaki's seventh child was dead. Balram was growing up at Nandbaba's house. After one year Krishna was born. Both of them were beautiful and attractive. Sage Garg had said at the time of naming ceremony that this child will have infinite strength (BAL). That is why he is called Balram. Because he was drawn from Devaki's to Rohini's womb, He became known as Lord Sankarsana (ploughing) and because of His strength, He is known as Lord Balram. He was so powerful that he, single handedly, at a very tender age, killed the great demon, Asura Dhenuka, who was in the form of an ass.

Just before Rukmani's marriage, Revati, daughter of King Raivat of Aanart region was married to Balram. For lifetime, Balrmaji was always with Krishna and protected him. He was elder to Krishna so he could not order him but whenever Krishna needed him; he never hesitated to give his service to him.

He had contributed towards killing the demons and giants. Balram had gone with Krishna in the Dhanush Yagya organized by Kans. He supported Krishna in killing Kubal, the elephant. While wrestling, Balram threw Mushtik (trusted lieutenant of Kans) so badly that he was killed on the spot.

Jarasandh used to attack Mathura on and off. Balram, along with the army of the Yadavas used to fight with Jarasandh and send him back every time. When Kalyavan came to attack, even Jarasandh came with him. Balram caught hold of Jarasandh with his strong hands. Krishna asked Balram to leave him saying that there were many demons and if Jarasandh is left alive then he will make an army of the demons. When Jarasandh will come once more with the demon's army, many more demons can be killed. So Balram relieved him. Jarasandh had twenty-three armies with weapons. Slowly and gradually, Balram defeated them all. When Kalyavan had encircled them - then Krishna ran in front of them and Balram confronted his army. Krishna got Kalyavan burnt and Balram defeated his army.

Balram trained both Bhima and Duryodhan in club-fighting. Eventually, his students faced one another in the final combat of the Kurukshetra war. Because of this, Balram chose to remain neutral during the conflict. Eventually when Bhima (of greater strength) defeated Duryodhan (of greater skill) by dealing a blow below the navel with his mace (a move against the rules of mace combat), Balram threatened to kill Bhima. This was only prevented when Krishna reminded Balram of Bhima's vow to kill Duryodhan by crushing the very thigh he exposed to his wife Draupadi.

Today also there are many temples of ‘Dauji' (elder brother) where he is worshipped. It is a common belief, he bestows materialistic richness.

Lord Balram is also known as "God of farmers". Farmers in India worship him before any task. His weapon plough is worshipped by farmers before all important tasks related to farming.
The funeral ceremony of Abhimanyu, the son of Arjun, was performed by Balram, as He was the maternal uncle.

Due to a curse placed on the Yadu dynasty they were to be the cause of their own destruction. This took place thirty-six years after the end of the battle of Kurukshetra. Balram took part in the drunken battle that caused the destruction of the rest of the Yadus, and after he witnessed the disappearance of Lord Krishna, Lord Balram sat down in a meditative state. In his last stages, a great white snake emerged from his mouth and he departed from this world. The place where he departed from this world is situated about 1 km far from Somnath temple in Gujarat. As the local people of Veraval (a town in Gujarat) say, there is one cave in the town where it is believed the white snake came out of Balram's mouth.