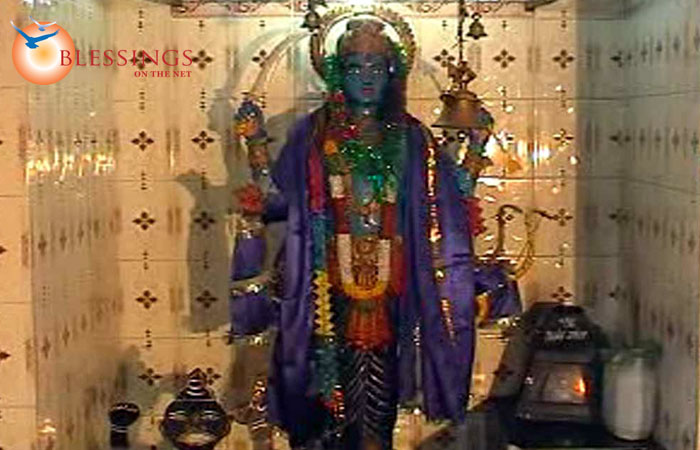 Lord Shani, son of Surya Dev and Vikshubha or Chhaya is one of the nine "Navagraha" (celestial gods) in Hindu religion. Lord Shani occupies the seventh place among these nine planets which govern our lives. On the birth of Lord Shani when he first opened his eyes, it is believed that his father Surya went into an eclipse. Since then Lord Shani is believed to be the god causing miseries in the life of a human being.  Shanidev occupies the principal position among the pantheon of Hindu deities in warding off evil and to get rid off obstacles. Lord shani is the brother of Yama (deity of death) and is believed to be responsible for punishing or rewarding one in the lifetime in accordance with their 'karma' (action).

God Shani is depicted in Hindu mythology as extremely dark wearing black clothes and mounted on a vulture or a raven. The trinity Brahma, Vishnu and Mahesh are the creator; preserver and destroyer of the world but to execute these tasks several incarnations of Lord have taken birth. Lord Shani in this sense is believed to be the incarnation of Lord Vishnu like the other eight planets. Since Lord Shani is designated the task of granting the fruits of one's action he is the most feared amongst Hindu gods. The powerful lord is believed to have the control of making a king into a pauper as well as changing the fortunes of a sufferer.

Lord Shani is worshipped extensively across the length and breadth of India. He is specially revered by people who face difficult times in their lives and find solace in doing 'dan' (service by donating) on Saturdays. Saturday is the day denoted to Lord Shani and it is believed that those who have Shani as their swami should resort to wearing the stone of Lord Shani - Sapphire. More than anything, it is felt by many great men that the difficult times one faces when Lord Shani or Saturn is in a particular position; it leaves you as a wiser and better human being.

Shani Dev is a great devotee of Lord Shiva and hence those who wish to appease him pray to Lord Shiva along with Lord Shani. Since Shani dev is considered an incarnation of Lord Sri Vishnu it is also said that to protect oneself from the wrath of Shani, a visit to Lord Venkateshwara's shrine in Tirupati is suggested. Shani dev has few shrines in India the most important ones are in Tamil Nadu in Thirunallar Saneeswaran temple , Maharashtra at Shingnapur, Shanidham at Mehrauli Delhi, Shree Sahneeshwarar at Nerul Mumbai. In Vedic astrology it is believed that if Saturn or Shani is placed in a favorable position for you, no one can bestow more wealth and success than Lord Shani.