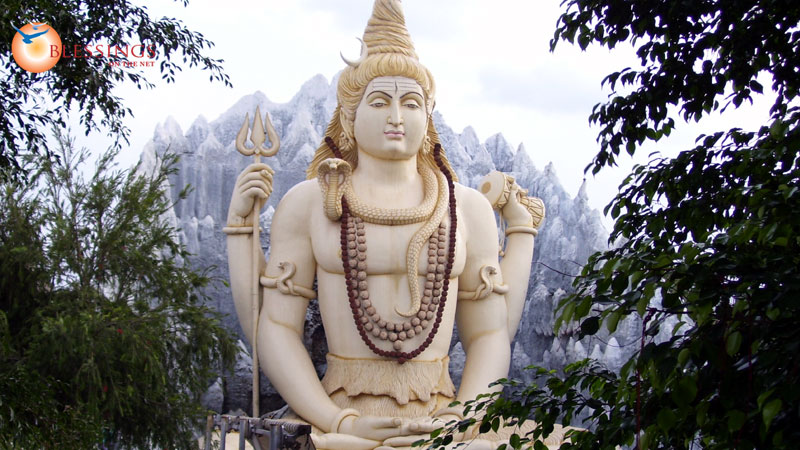 "Mahadev is the cause of the vast universe

And Maya (illusion) is his eternal slave

Shiva is the cosmic Absolute in visible form

Shiva consciousness and deeds are inscrutable"

Shiva is said to reside in the Kailash range in the Himalayas. Parvati is his consort, and Lord Ganesh and Subramanya his sons. He also has another son, Lord Ayyappa, by Mohini (Lord Vishnu in woman form).

From the tender green leaves to the frail wind that whispers through the leaves, from the atoms that forms the earth to the endless galaxies, everything that has a beginning is ultimately culminates into nothingness. It is this unfathomable mystery of ultimate dissolution, which the Hindus personify as Lord Shiva. Lord Shiva is thus the destructive principle of the Hindu trinity. Lord Shiva represents the aspect of the Supreme Being that creates, dissolves and then recreates the universe. Lord Shiva is the destroyer, the destroyer of Maya or illusion. Lord Shiva protects his devotees from the evil forces of lust, greed and anger.

The anthropomorphic representation of Lord Siva fills the beholder with fear and mystery at the same time he is overwhelmed with submissive reverence. There is a lot of symbolism associated with the appearance of Lord Shiva. Lord Shiva's body is smeared with ashes, which according to the legends Siva himself smeared on him. The ash is symbolic of death. Thus Lord Shiva is the representation of the cycle of life. The esoteric third eye of Lord Shiva symbolizes ultimate spiritual knowledge.

He is also known as the Tryambak Deva or the three eyed Lord. The third eye opens only when Lord Shiva is provoked to anger. And when this happens the deadly rays emanating from this eye pulverizes the object of his wrath. Lord Shiva is often shown with the waters of the sacred Ganga flowing through his matted hair. The azure tinge of his neck came about when Siva gulped a terrible poison to save the Universe from destruction. He holds a trident, which is symbolic of the three fundamental powers of Lord Shiva. The Snake coiled around his neck symbolizes the cosmic energy and at the same time it is symbolic of the recurrent cycle of creation. The Rudraksha Mala has 108 beads and these beads symbolize the elements use in the creation of this Universe.

The Shiva Linga symbolism :- Lord Shiva is enshrined in the form of the Shiva lingam in most of the temples. Associated with the Lingam is the Yoni or the female principle. Thus the Lingam and the Yoni together represents the union of Purusha and Prakriti. Thus the Shiva Lingam is the very origin of the Universe. Though the Shivalingam is very simple in its structure, it has a very complex significance associate with it. The Linga Purana says that the root of the Lingam represents Brahma, the middle part symbolizes Vishnu and the uppermost part is Rudra. The altar represents Mahadevi.

Shiva is also known by the names Mrityunjay, Shankar, Mahadev, Rudra, Neelkanth, Mallikarjun, Nandikeshwar, Gaurishankar, Gangadhar, among many others.