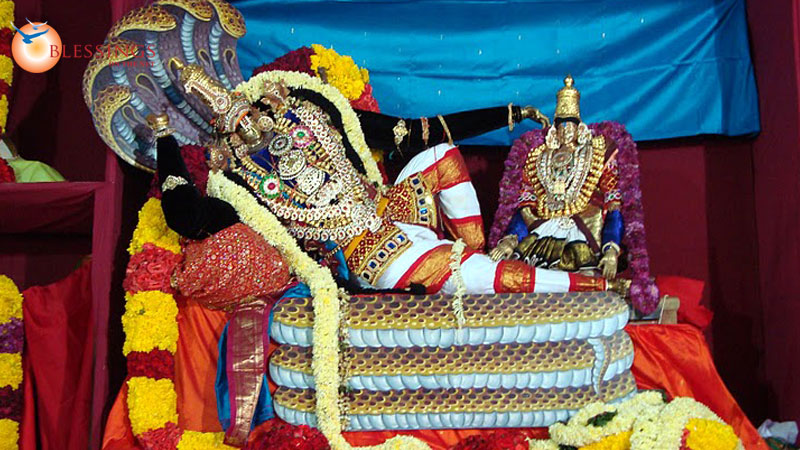 Vishnu is regarded as a major god in Hinduism and Indian mythology. He is thought as the preserver of the universe while two other major Hindu gods Brahma and Shiva, are regarded respectively, as the creator and destroyer of the universe.

In the ancient body of literature called the Veda, the sacred literature of the Aryan invaders, Vishnu ranks with the numerous lesser gods and is usually associated with the major Vedic god Indra in battles against demonic forces. In the epics and Puranas-writings belonging to subsequent periods in the development of Hinduism-Vishnu (especially in his incarnations) becomes prominent. Some Puranic literature refers to him as the eternal, all-pervading spirit and associates him with the primeval waters believed to have been omnipresent before the creation of the world. So regarded, Vishnu is depicted frequently in human form, sleeping on the great serpent Shesha and floating on the waters. The concept of Lord Vishnu as preserver is comparatively late. It is based chiefly on two beliefs: humans may attain salvation by faithfully following predetermined paths of duty, and good and evil powers (gods and demons) contend for dominion over the world. Occasionally, the balance of power is upset in favor of evil, and then Lord Vishnu is believed to descend to earth in a mortal form (his avatar) to save humankind or the world.

Ten such avatars (descents or incarnations) are commonly recognized, of which Lord Rama and Lord Krishna are the most important. Nine descents are thought to have already occurred; the tenth and last is yet to come. Scholars believe that Vishnu's role as preserver (or redeemer) arose from the characteristic practice of assimilating local legendary heroes and gods into the Hindu pantheon by attributing their deeds to one of the major Hindu deities.

The preserver God of the Trinity has four hands. The first holds a conch shell (sankha) indicating spread of the divine sound "Om"; one holds a discus (chakra), a reminder of the wheel of time, and to lead a good life; one holds a lotus (Padma) which is an example of glorious existence and the fourth hand holds a mace (gada) indicating the power and the punishing capacity of the Lord if discipline in life is ignored.

His vehicle is the swift-flying bird Garuda which can spread the Vedic knowledge with great courage. The dark color of the Lord represents the passive and formless ether, a great quality for a pervading God. He rests on the bed of the powerful, coiled serpent, Seshanag who represents the sleeping universe. Lord Vishnu is also known as Hari, the remover.

Lord Vishnus consort is Goddess Lakshmi, the Goddess of Wealth.