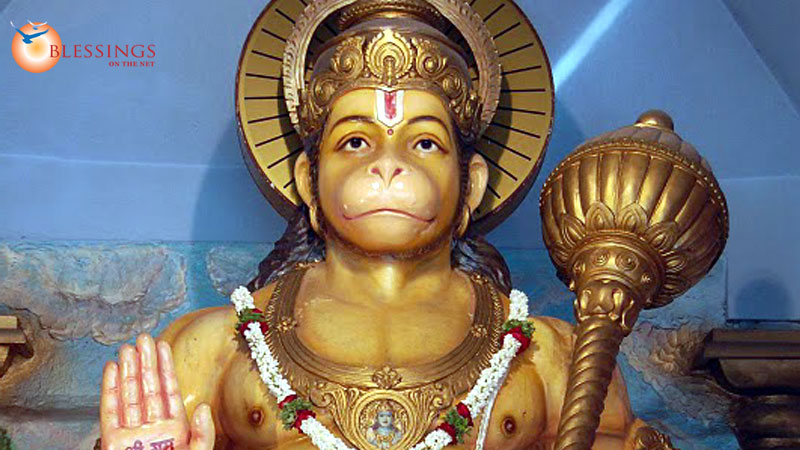 Sri Hanuman was born of Anjani from Pavana, the wind-god. He was named Hanuman after the name of the city of Hanumpur over which his maternal uncle Parti Surya ruled. Hanuman's body was hard as a stone. So Anjani named him Vajranga. He is also known by the names "Mahavir" or mightiest hero (because he exhibited several heroic feats), Balibima and Maruti.

Vyakaranas. He learnt the Sastras from the sun-god. He was the wisest of the wise, strongest of the strong and bravest of the brave. He was the Sakti of Rudra. He who meditates on him and repeats his name attains power, strength, glory, prosperity and success in life. He is worshipped in all parts of India, particularly in Maharashtra.

He was born at the most auspicious hour of the morning of the 8th of the Lunar month, Chaitra, at 4 o'clock on the most blessed day, Tuesday.

He had the power to assume any form he liked; to swell his body to an enormous extent and to reduce it to the length of a thumb. His strength was superhuman. He was the terror of Rakshasas. He was well versed in the four Vedas and other sacred books. His valour, wisdom, knowledge of the scriptures and superhuman strength attracted everybody who came near him. He had extraordinary skill in warfare.

From his very birth he exhibited extraordinary physical strength and worked many miracles.

When he was a child he put the sun into his mouth. All the gods were very much troubled. They came with folded hands to the child and humbly entreated him to release the sun. The child set free the sun at their request.

Hanuman saw Sri Rama for the first time in Kishkindha. Sri Rama and Lakshmana came there in the course of their search of Sita whom Ravana had carried away.

In Lanka, Hanuman exhibited his immense strength and extraordinary powers. He destroyed the beautiful grove which was a pleasure resort of Ravana. He uprooted many trees and killed many Rakshasas. Ravana was very much infuriated at this. He sent Jambumali to fight against Sri Hanuman who took the trunk of a tree and hurled it against Jambumali and killed him. Ravana sent his son Aksha to fight against Hanuman. He was also killed. Then he sent Indrajit. Hanuman threw a great tree upon Indrajit. Indrajit fell down senseless on the ground. After some time Indrajit recovered his consciousness. He threw the noose of Brahma on Hanuman. Hanuman allowed himself to be bound by the noose. He wanted to honour Brahma. Indrajit ordered the Rakshasas to carry the monkey to his father's court. Even a hundred Rakshasas were not able to lift Hanuman.

Hanuman made himself as light as possible. The Rakshasas then lifted him up. When they placed him over their shoulders he suddenly became heavy and crushed them to death. Then Hanuman asked the Rakshasas to remove the rope. They removed the rope and Hanuman proceeded to the council hall of Ravana.

Ravana said, "O mischievous monkey, what will you say in your defence? I will put you to death." Hanuman laughed and said, "O wicked Ravana, give back Sita to Lord Rama and ask his pardon; otherwise you will be ruined and the whole of Lanka will be destroyed." These words of Hanuman made Ravana very furious. He asked the Rakshasas to cut off the head of Hanuman.

Vibhishana intervened and said, "O brother, it is not lawful and righteous to kill a messenger. You can inflict some punishment only."

Ravana consented. He wanted to deprive Hanuman of his tail and make him ugly. He ordered the Rakshasas to wrap Hanuman's tail with cloths soaked in oil and ghee. Hanuman extended his tail to such length and size that all the cloths in Lanka would not cover it. Then he reduced his tail of his own accord. The Rakshasas wrapped the tail with cloths soaked in oil and ghee and lighted the cloths. Hanuman expanded his body to an enormous size and began to jump from place to place. The whole of Lanka caught on fire. All the palatial buildings were burnt down to ashes.

Hanuman then jumped into the sea in order to cool and refresh himself. A drop of his perspiration fell into the mouth of a great fish which gave birth to a mighty hero named Makara Dhvaja. Makara Dhvaja is considered the son of Hanuman. Thereupon Hanuman went to the Asoka grove and told Sita all that he had done.

Then he crossed the sea through the air and came to the place where his army was placed. He told them all that had happened. Thereupon they all marched quickly to carry the good news to Sri Rama and Sugriva. They reached the city of Kishkindha. Hanuman gave Sita's ring to Lord Rama. Sri Rama rejoiced heartily. He praised Hanuman and embraced him saying, "O mighty hero I cannot repay your debt."

When all the brothers and sons of Ravana were killed, Ravana sent for his brother Ahi Ravana who was the king of the nether world. Ahi Ravana came to Lanka. Ravana asked his help to fight against Sri Rama and Lakshmana.

Ahi Ravana consented to help his brother. At the dead of night he assumed the form of Vibhishana, the brother of Ravana and an ally and devotee of Sri Rama. He reached the place where Rama and Lakshmana were sleeping. Hanuman was keeping watch. He thought that it was Vibhishana who was coming. Therefore he allowed him to enter the camp. Ahi Ravana quietly took the two brothers upon his shoulders and repaired to his kingdom.

When the day dawned, Hanuman found out that Sri Rama and Lakshmana were missing. He found out that Ahi Ravana had carried them to his kingdom. At once he proceeded to the nether world and received information that Ahi Ravana had made arrangements to kill the two brothers in sacrifice. Hanuman assumed a tiny form, entered the temple and sat over the image of the goddess. The image went down into the earth. Hanuman took her seat. When Ahi Ravana was about to sacrifice the two brothers, Hanuman appeared in his own form and killed him. He installed Makara Dhvaja, his own son on the throne, took the brothers on his shoulders and brought them to Lanka.

Hanuman killed many heroes in the great war. Dhumar, Vajro, Roshat, Ankhan and several other great warriors were killed by him.

When the great war was over, Vibhishana was installed on the throne of Lanka. The time of banishment was about to be over. Sri Rama, Lakshmana, Sita and Sri Hanuman sat in the Pushpaka Vimana or aeroplane and reached Ayodhya in time.

The coronation ceremony of Lord Rama was celebrated with great eclat and pomp. Sita gave Hanuman a necklace of pearls of rare quality. Hanuman received it with great respect and began to break the pearls with his teeth. Sita and other ministers who were sitting in the council hall were quite astonished at this queer act of Hanuman.

Sita asked Hanuman, "O mighty hero, what are you doing? Why do you break the pearls?" Sri Hanuman said, "O venerable mother, it is the most valuable necklace indeed as it has come to me through thy holy hand. But I want to find out whether any of the pearls contain my beloved Lord Rama. I do not keep a thing devoid of him. I do not find him in any of the pearls." Sita asked, "Tell me whether you keep Lord Rama within you." Sri Hanuman immediately tore open his heart and showed it to Sri Rama, Sita and others. They all found Lord Rama accompanied by Sita in the heart of Sri Hanuman.

Lord Rama rejoiced heartily. He came down the throne and embraced Hanuman and blessed him. Sri Hanuman passed the rest of his life in the company of the Lord.

When Sri Rama ascended to his supreme abode, Sri Hanuman also wished to follow him. But the Lord asked him to remain in this world as his representative and attend all the assemblies of men where discourses on his deeds were held and heard, and help his devotees in cultivating devotion.

Hanuman is a Chiranjeevi. He is everywhere. He who has eyes and devotion beholds him and receives his blessing.

Hanuman ranks first amongst the heroes of the world. His heroic deeds, wonderful exploits and marvellous feats of strength and bravery cannot be adequately described. His sense of duty was extremely laudable. He had great skill in all military tactics and methods of warfare. His crossing the sea of thirty miles in one leap and lifting the crest of a mountain in the palm of the hand, his carrying of the brothers on his shoulders from the nether world to Lanka are all astounding, superhuman feats which baffle human description.

Hanuman conquered innumerable difficulties which cropped up in his way through his courage, patience and undaunted spirit. He made untiring search to find Sita. At the time of danger he exhibited marvellous courage and presence of mind. He was steady and firm in his actions. He was always successful in his attempts. Failure was not known to him. He gave up his life in the service of the Lord. He had not a tinge of selfishness in his actions. All his actions were offerings unto Lord Rama. No one reached the peak in Dasya Bhava like Sri Hanuman. He was a rare jewel among devotees, the supreme head among Pundits, the king among celibates and the commander among heroes and warriors.

O mighty Hanuman, untiring and devoted Sevak of Sri Rama, joy of Anjana, king of Brahmacharins, show us the secrets of Brahmacharya and the ways to attain purity in thought, word and deed. May India have such heroes and Brahmacharins ever more!