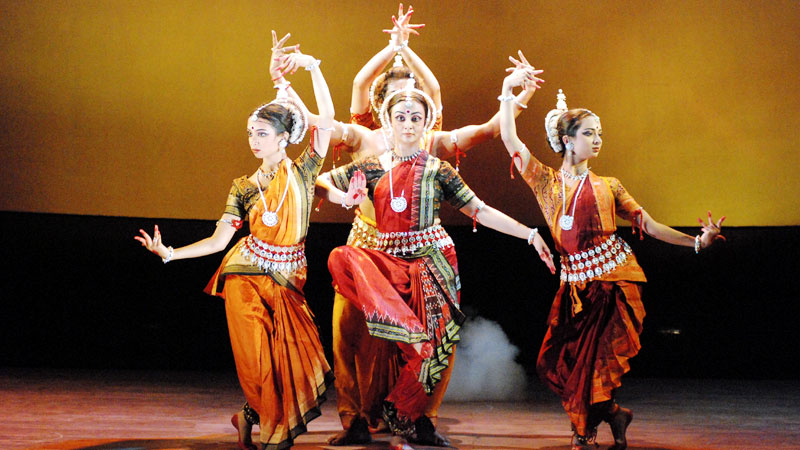 In India, the aesthetic strikes a balance between the ancient and the modern, the classical and the folk. Come to a recital and you witness a moving eloquence: each motion a suggestion, each gesture a silent phrase.

Dance in India is a rhythm capture in the vast plains and enraptured to the beat of the musicians. Eyes, faces, hands, feet move to varying moods, reflecting an idiom of the perfection of an ancient art.

Home to Bharata Natyam, once performed in temples by devdasis.Indian dance reflects a magnificent heritage, individually perfected by each dancer.Aiding the swishing of silk, the glitter of diamonds and the note of tinkling bells worn on the dancer's feet is the orchestra.

The major percussion is the tabla, pakhawaj or mridangam played to an intricate beat by the artiste's fingers. Other major instruments are the sitar and veena, stringed instruments and the harmonium, a key board instrument. But a major orchestra has these and a large number of their variations. Each region has its peculiarities and instruments. Among the more common, however, are the tanpura-a stringed instrument used as a drone, and the shehnai and nadaswaram, wind instruments used at weddings and associated with welcomes and joyous celebrations.

Dance and drama in India are synonymous. Each expression of a dancer tells us a story. But certain dance forms have become the basis of the theatre tradition in India. Of these, Kathakali is the most well known with the dancers garbed in brilliant plumage, their magnificent make-up having taken the best part of a day. Then there is the Yakshagana, and the Bhavai and Tamasha, the latter very popular in west India and expressive of more modern needs.

Modern theatre directors have experimented with the dramatic form resulting in startling variations: ballets in the, Yakshagana and MayLirbhanj Chhau strain, musical extravaganzas and street theatre. Each of them owes to the tradition of the past.

The excitement of the Bhangra never ceases. The Ghoomar is poetry in motion. Folk dancers gather in striking ensemble to recollect notes on the beautiful hills and streams, the mountains and the jungles that are their home. The snow lion pounces from the highlands of Himachal to Sikkim. The skirts of the women spinning to the Dandiya Rass flip-flap to the clack-clack of the sticks in their hands. Qawwali singers clap their hands in time to the beat of the song. And the milk- maids look beseechingly as Krishna and Radha dance the Raas Lila.

Dance in India, is rooted in age-old tradition. Like the Indian culture, Indian classical dances are equally diverse in nature. There are numerous classical dance forms in India and innumerable folk dances.

Like the Indian culture, Indian classical dances are equally diverse in nature. There are numerous classical dance forms in India and innumerable folk dances. Each dance form can be traced to different parts of the country. Each form represents the culture and ethos of a particular region or a group of people

The most popular classical dance styles of India are Bharatnatyam of Tamil Nadu, Kathakali and Mohiniattam of Kerala, Odissi of Orissa, Kathak of Uttar Pradesh, Kuchipudi of Andhra Pradesh and Manipuri of Manipur.

Nurtured in temples, princely courts or villages, dance has moved into the auditorium of today. It is now possible to appreciate the lyrical grace of the Manipuri dance of North-Eastern India in, say, Gujarat. This dance-form arising out of Krishna-bhakti, is sinuous in its movements and romantic in its concept, celebrating a divine theme which is meaningful to people all over the country. Similarly, the sophistry of Kathak, which flowered at the courts of the Mughal princes with its accelerated tempo, intricate foot-movements, and subtle facial expressions, evokes a resplendent past common to us all.

The abundant largesse of dance in South India, from the Bharatanatyam of Tamil Nadu, to the Kathakali dance-drama of Kerala, to the Kuchipudi of Andhra, has become part of the melting-pot of culture enriching the life of any Indian today. For, to witness the strength and vigour of Kathakali as it enacts episodes from the Mahabharata and the Ramayana, is an education in itself. The extremely stylised gestures, the elaborate make-up, the masks and the splendid costumes of these all-male dancers, recreates an incomparable sense of pageantry. Bharatanatyam, the temple-maiden's dance of devotion, has a classic quality which is as daunting as it is beautiful. The rigorous precision of foot and hand movements, the eloquent range of expression depicted through eyes and mouth, and the total linear consonance of body is exacting and exciting in its perfection.

Bharata's Natya Sastra is the Bible of Indian aestheticians. It says that the Creator (Brahma) created it to give joy in life to the gods who found their cosmic functions to be heavy and dreary. According to a popular belief, Brahma, the Creator of the World, combined literature from the Rig Veda, songs from the Sama Veda, abhinaya (expression) from the Yajur Veda and rasa (aesthetic experience) from the Atharva Veda, to form natya (what we today call dance). It explains the nuances of dance, giving stress on mudras (hand formations) and their meanings, the kind of emotions and their categorization.

The Indian dancer catches in her movements the shyness of the gazelle, the haunting smile of a lingering memory and the divinity of the great Cosmic Dancer, Shiva, the Nataraja, to whom all dancers must pay obeisance before and after each performance. To have seen an Indian dance is to have experienced bliss.